Watch the video to learn what went into making REFLECTOBOTS!

This is a Game Jam entry in which I created the most polished mini-game I could in a week of moonlighting.

In it I used FSMs in UE4 to quickly encapsulate and iterate the basic combat mechanics, which I wanted to be as self-explanatory as possible, and using as few buttons as possible.

Game design wise, the risk / reward systems are relatively simple, but I was happy with the actual 3C’s implementation, to which I tried to apply as much polish as possible in the limited time I had.

Likewise, I created menus that can be used both with keyboard and gamepads (a challenge in UE4!) which required some ingenous thinking.

As for AI, I designed some relatively simple AI that was still effective mainly thank you to  wave system for which I took inspiration from Doom 2016, in which the waves spawn before all the previous enemies are defeated; this way, the intensity of combat lowers but does not halt.

This was also my first time making extensive use of the sequencer tool in UE4, which was quite rewarding. While making 10 seconds of footage takes about an hour of actual work, the sheen that is added to a game of this tiny scale surely was worth it.

Unfortunately I did not end up presenting the game to the game jam awards, so I could not measure my work against my peers. Yet, the project is here for archiving as a way to remind myself what I was able to achieve in about 30 hours of work. 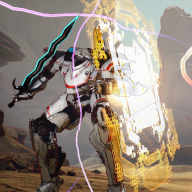